Since everyone and their mother has binge watched Netflix’s phenomenal Stranger Things, it seems the same number of people are now posting guides to help people get into Dungeons & Dragons. There are guides for finding games near you (hint: check Wizards of the Coast’s website, check your local game store, or browse Roll20), where to buy rule books (ohai, Amazon!), and the basic rules of the game.

As a person who owns a dog-earred copy of the first edition of Dungeons & Dragons, and has a well-loved copy of 3rd edition and an even more hammered copy of 5th edition, I’m thrilled to see people are into it. Leave it to a show featuring a bunch of kids to help people realize that not only is D&D still a thing, it’s incredibly easy to get into. Better than that, it’s fun. So much fun.

Let’s assume you’ve bought a 5e PHB, you’ve found either a digital group or a local group, and you’re ready to play. You have your dice set, you have a mechanical pencil with backup erasers and lead, and you have your character sheet. You are ready to roll for initiative! OR ARE YOU?

I’ve played D&D with a number of groups over the years and I can tell you there are two types of players you encounter: polite players that everyone loves to play with, and rude players who no one wants to play with, but you probably have to play with him or her because they’re related to the DM, or s/he is one of the most dependable members of the party. Ugh. Just the worst. You’re going to encounter the latter, a lot, but rudeness does not beget rudeness, and so I present unto you D&D etiquette that would make the late Emily Post proud*. 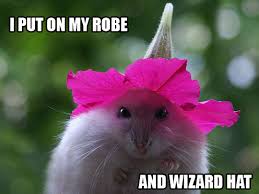 You wanna know the secret to being a “good” D&D player? Come to the party ready for action and adventure. Bring your PHB, bring your sheets, bring your dice, bring your pencils and bring your imagination. Don’t be that person who shows up and has to bum another player’s PHB all night, or have to guess at your stats because you left your sheet at home. D&D is srs business.

This goes hand-in-hand with the above rule. Pay attention to the DM. Put your phone in your backpack or purse, and listen when the DM is talking. Nothing is worse, for the rest of the party, than constantly being asked to look at some stupid meme you found on Facebook while the DM is describing how your party was just ambushed. Or having your healer say “OK, what’s going on?” at the start of every turn. The DM is weaving a story for you — sometimes whole cloth, if you have an amazing DM — and the very least you can do is give that person your undivided attention. If you keep your ears open, you’ll hear and remember that the guards you’re fighting are wearing heavy armor, made of metal, and hey, look at that, you have Heat Metal prepared. Oh, how about that.

So very much of D&D boils down to teamwork. You and your party need to work together, through thick and thin and different personalities. It’s good to offer suggestions and point out helpful things, but at the end of the day, your party members play their characters the way they want to. Don’t be that person constantly telling everyone what they need to do. More importantly, don’t get huffy and put-out when they don’t take your suggestion. OK, so the Fighter just started a fight with that ogre after you told him/her not to. TIME TO ROLL FOR INITIATIVE, SON.

4. But don’t be a goddamn asshole

Having said that, don’t be that asshole who just does whatever, whenever, because you think it’s fucking cute. It’s not. Don’t be the person who rolls into a town and just starts killing random NPCs because hahahahaha isn’t it funny that everyone is attacking us now? No, it’s not, and you’re an asshole. You’re part of a team, and that means acting like it. You don’t have to consult the council on every step you take, but don’t ruin the game for others. It’s the quickest way to never be invited back because literally no one likes to play with this person. “HAHAHA I just tied up the entire party while they were sleeping and now they have break free of MY bonds before they can fight these gnolls that have ambushed us, isn’t that HILARIOUS?” Congratulations, you are now (rightfully) the subject of any number of Reddit rants.

It’s OK to disagree with the DM, on occasion. You may notice that the PHB is surprisingly stark on some rules. That’s because a great deal of D&D is left to the players’ and DM’s inference and interpretation. Having said that, the DM is ultimately the god of your game world. If you want to use a spell in a scenario and the DM says you can’t, you can try to give a solid reason for why you should, but ultimately let it go and move on. You’re just bogging down the rest of the party. This goes double for if the party agrees that you’re interpreting a spell or ability wrong. Don’t be Rules Guy/Gal. 7. Cast off the shackles of “cool”

You are free to role play as much or little as you feel comfortable, but this is one of the few times when it’s socially acceptable to be utterly silly. Act out your verbal and somatic spell components. Try out a silly accent. Demonstrate your critical hit arm movements. You’re playing the goddamn pinnacle of nerd culture. Get into it.

Laugh, joke, maybe cry because a dragon just got a lucky nat20 on you and now your character is now a ashy puddle, and rejoice in the D&D. Some of the best friends come from D&D games. You’ll have inside jokes (tables of the tables), epic moments (probably involving Tasha’s Hideous Laughter and a weretiger) and the best night of your week with your D&D crew.

Bonus point: Learn what metagaming is

This is not as necessary of an etiquette rule, but it’s one of those things that, if you insert yourself amongst veteran players, they’ll be super impressed you know this. Avoid metagaming. Try to think about what your character would do, or know. You might not want to rush into the burning building to save the orphans, but would your character want to? Likewise, you might know if you see a banshee you should cover your ears, but would your character know that? Separate your real world knowledge from that of your character. This goes along with role playing.

And that is all it takes to be that good, nice, awesome player that everyone loves. Don’t be the other type. Now get out there and roll some damn dice like the badass you are. *sniffle* So proud of you.

*Probably not really. I think she would this all a waste of time because, you know, stuffy. But you feel me, here.